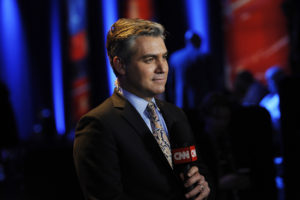 CNN Republican Debate at the University of Miami.

WASHINGTON, D.C., Aug. 9, 2017 – The National Association of Hispanic Journalists (NAHJ) will honor CNN Senior White House Correspondent Jim Acosta with the NAHJ Presidential Award at the Hall of Fame Gala on Saturday, Sept. 9. The gala, presented by Toyota, will be held at the Anaheim Marriott, in Anaheim, CA.

“For the past years, I’ve seen Jim Acosta in action. He’s covered President Obama and President Donald Trump, always pushing both sides to answer the tough questions,” commented Brandon Benavides, NAHJ President. “As a voice for the people, Acosta is not afraid to hold our elected leaders accountable. Regardless of criticism, he remains focused in a pursuit of truth for our communities. Acosta is among an elite group of journalists covering the White House.”

After following then candidate Donald Trump on the campaign trail, Acosta currently serves as CNN’s senior White House correspondent, covering the Trump administration from the White House and around the world. He regularly covers presidential press conferences, visits by heads of states, and issues impacting the Executive Branch of the federal government.

Before joining CNN, Acosta served as a CBS News correspondent covering major national news stories including the Iraq War from Baghdad, the 2004 presidential campaign of then-Sen. John Kerry, Hurricane Katrina, and the blackout of 2003 that impacted major cities in the Northeast U.S.

In addition to celebrating the dedication and work of Acosta during the event, NAHJ announced recently the five industry leaders to be inducted into the association’s Hall of Fame. For more information on the Gala’s honorees, click here.

This year, NAHJ will be taking part in the Excellence in Journalism (EIJ) conference, along with the Society of Professional Journalists (SPJ) and the Radio, Television, Digital News Association (RTDNA). EIJ will take place Sept. 7-9, 2017, in Anaheim. The Hall of Fame Gala is presented by Toyota and will be held at the House of Blues. The Gran Baile, or closing dance, which is open to all EIJ attendees, will immediately follow. Tickets to this event can be purchased here.

About NAHJ The National Association of Hispanic Journalists (NAHJ) is the largest organization of Latino journalists in the United States and dedicated to the recognition and professional advancement of Hispanics in the news industry. The mission of NAHJ is to increase the number of Latinos in the newsrooms and to work toward fair and accurate representation of Latinos in news media. Established in April 1984, NAHJ created a national voice and unified vision for all Hispanic journalists. NAHJ has approximately 2,000 members, including working journalists, journalism students, other media-related professionals and journalism educators. For more information please visit NAHJ.org or follow on Twitter @NAHJ.