(Washington, D.C.) – The National Association of Hispanic Journalists (NAHJ) condemns the actions taken by the Minnesota State Patrol, who arrested CNN Correspondent Omar Jimenez, CNN Producer Bill Kirkos and CNN Photojournalist Leonel Mendez for doing their job that is protected under the First Amendment. The journalists arrested Friday morning were live on the air covering the ongoing protests over the killing of George Floyd in Minneapolis, Minnesota.

This thread from CNN shows the arrest of Omar Jimenez.

Omar Jimenez, Bill Kirkos, and Leonel Mendez were arrested around 5 a.m. CT (6 a.m. ET) while reporting from a street south of downtown. The crew was released an hour later around 6 a.m. CT.

While the arrest was not violent, Jimenez was not told why he was being arrested when he asked.  Following the crew’s release, Jimenez reported live and said he was treated cordially.

Police told the crew the detainment occurred because they were told to move and did not comply. However, in the video which continued to capture the exchange, viewers can see and hear Jimenez identifying himself as a reporter, showing his press badge, and telling the officers – the crew would move wherever the officers directed.

“The arrest of Omar Jimenez, Bill Kirkos, and Leonel Mendez is a distinct violation of their First Amendment rights,” said Hugo Balta, President of NAHJ. “The necessity of documentation to expose real-life occurrences in events beyond this morning are becoming more and more glaring to the general public.”

“This is the power of journalism,” he added.

Not standing with the on-air crew, Josh Campell, a white male correspondent was also approached by police, but allowed to remain in the same area once he identified himself.
NAHJ reached out to the Minnesota Department of Public Safety Director of Communications, Bruce Gordon for comments on both the arrest and the release and was directed to the Minnesota state patrol tweeted the following this morning. 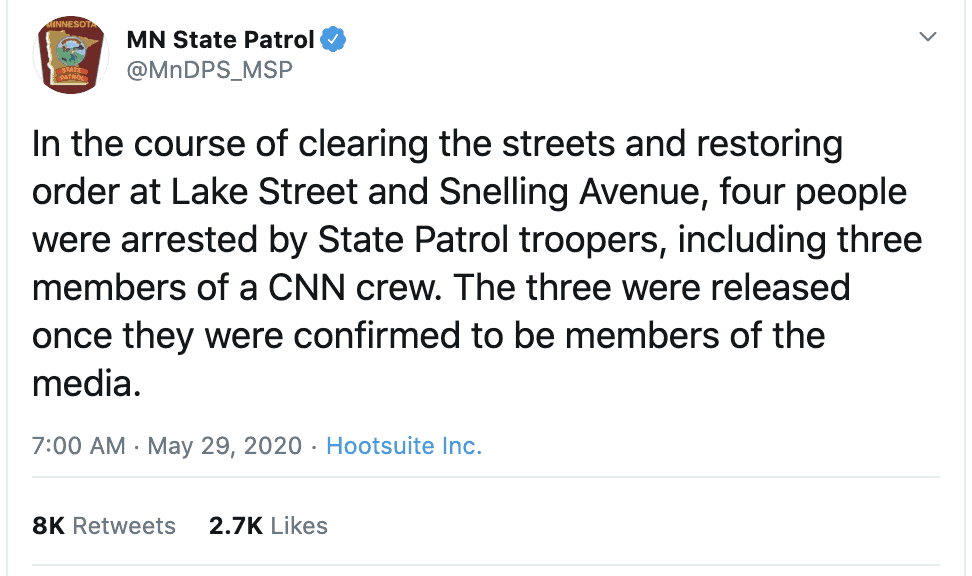 Gordon did not reply to follow up questions specifically regarding the distinction of scenarios with Campbell and Jimenez, and why the arrest was made in the first place.

The governor of Minnesota, Tim Walz, apologized on-air, stating his office’s intention to have the team immediately released and claimed full responsibility. But the apology did not acknowledge nor capture the difference in treatment between interactions with Campbell and the arrest of his colleagues of color.
NAHJ stands with Omar Jimenez, Bill Kirkos, Leonel Mendez, and all journalists working to keep the public well-informed. It is deplorable to see a continued abuse of power by authorities against journalists and the public’s right to access and information violated.

About the National Association of Hispanic Journalists (NAHJ)

The National Association of Hispanic Journalists (NAHJ) is the largest organization of Latino journalists in the United States and dedicated to the recognition and professional advancement of Hispanics in the news industry. The mission of NAHJ is to increase the number of Latinos in the newsrooms and to work toward fair and accurate representation of Latinos in the news media. Established in April 1984, NAHJ created a national voice and unified vision for all Hispanic journalists. NAHJ has approximately 2,500 members, including working journalists, journalism students, other media-related professionals, and journalism educators. For more information please visit NAHJ.org or follow on Twitter @NAHJ.