(Washington, D.C.) – Today, the National Association of Hispanic Journalists (NAHJ) continues to share ongoing concern over the treatment of journalists of color who are simply doing their jobs. This concern follows the recent actions against Nashville Public Radio political reporter Sergio Martínez-Beltrán.

The first time he was stopped, he was asked to check-in and show his ID, even though both his WPLN badge and General Assembly badge, which shows he is a member of the press corps, were visible. The existing protocol does not require a reporter who is wearing his credentials to sign in or show proof of identity, and Martínez-Beltrán has never been asked to do it before.

The second time he was denied while trying to enter a committee room despite that senate leadership allows press inside rooms. A sergeant-at-arms told him that he was not allowed, and he needed to wait while he sought confirmation from his supervisor. After a few minutes, he was allowed inside. 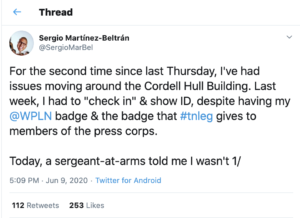 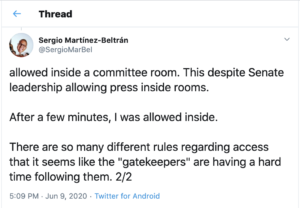 Martínez-Beltrán has been the WPLN’s politics reporter since September 2018 and is a member of the Tennessee Capitol Hill Press Corps. Martínez-Beltrán, who is Puerto Rican, is the only person of color in the press corps. 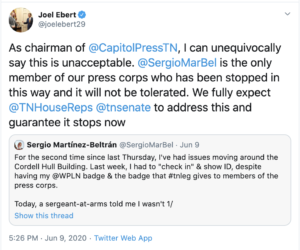 Officials said that private security contractors were hired and that they have changed some of the protocols due to COVID-19  regulations.

This form of harassment will not be tolerated. Journalists must inform the public and they should not be obstructed or under attack in any circumstances. Higher officials need to do better to ensure that journalists will not encounter these types of aggression.

About the National Association of Hispanic Journalists (NAHJ)

The National Association of Hispanic Journalists (NAHJ) is the largest organization of Latino journalists in the United States and dedicated to the recognition and professional advancement of Hispanics in the news industry. The mission of NAHJ is to increase the number of Latinos in the newsrooms and to work toward fair and accurate representation of Latinos in the news media. Established in April 1984, NAHJ created a national voice and unified vision for all Hispanic journalists. NAHJ has approximately 2,500 members, including working journalists, journalism students, other media-related professionals, and journalism educators. For more information please visit NAHJ.org or follow on Twitter @NAHJ.